We get a lot of questions from home buyers about asbestos. Will we identify the presence of asbestos? Can we test for asbestos? Does this or that material contain asbestos? Are my kids safe? And so on, ad infinitum. These are valid concerns because asbestos exposure can cause serious health issues, and symptoms may take 20-40 years to show up.

Where can you find asbestos? Everywhere.

During one of our monthly home inspector association meetings we had a specialist teach an excellent session on asbestos. We invited an industrial hygienist from Legend Technical Services, my go-to company for asbestos testing, to lead the class. At the end of the class, our instructor concluded with something that I’m going to share right at the beginning of this blog post: If a material is not made from wood or metal, it might contain asbestos.

That might be a slight exaggeration, but only slight. After going through the list of products in the class, the only way that I would feel comfortable telling someone that a product does not contain asbestos is if it was made from wood or metal. Asbestos has been used to create over 3,000 building products. Three Thousand. Even lab testing isn’t always enough to confirm that a product doesn’t contain asbestos; check out my blog post on vermiculite insulation for proof. I can’t possibly cover everything, but here’s a list of products that always or almost always contain asbestos, along with how we report on them here at Structure Tech.

This looks like a cross between cedar-shake siding and newer fiber-cement siding. It’s fairly brittle stuff, and most houses with this type of siding will have a few damaged or cracked pieces. 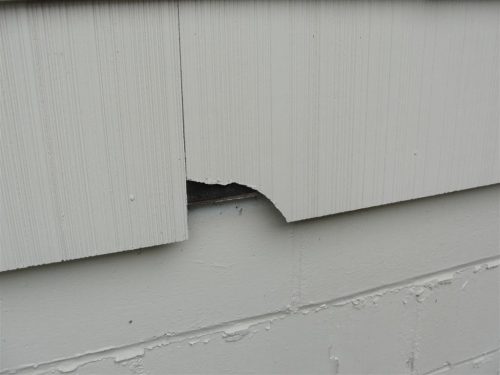 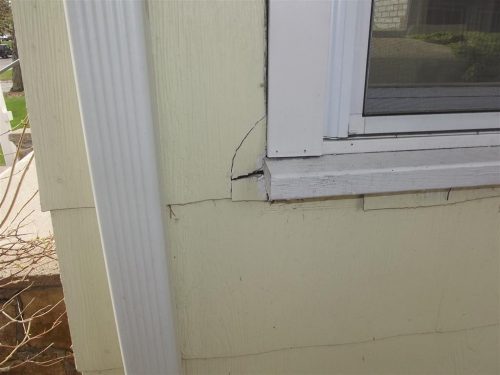 I have zero concerns about this stuff. The fibers are not easily released into the air, and it’s not located inside of the home. I’ve heard some insurance companies don’t like this stuff, however.

I recently blogged about these, and I put together a big compilation of photos in that post: Transite Asbestos Flues. 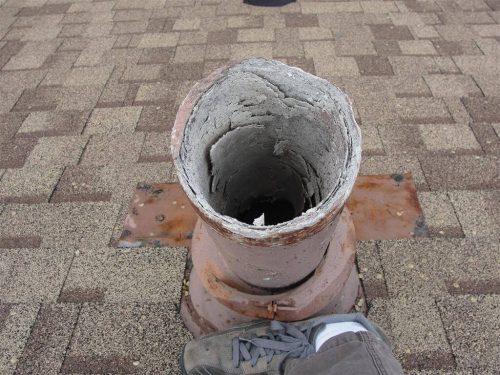 They’re typically bad news because they have a tendency to flake apart and collapse, which can create a serious safety hazard. But they’re not a health concern from an asbestos inhalation standpoint.

Usually when people refer to “transite heat”, they mean there is ductwork installed below the basement slab for air to travel through. The most common product is PVC, but transite-asbestos ductwork was also used for this. It’s very easy to tell the difference; just pop off a floor register cover to take a look at a cut edge. 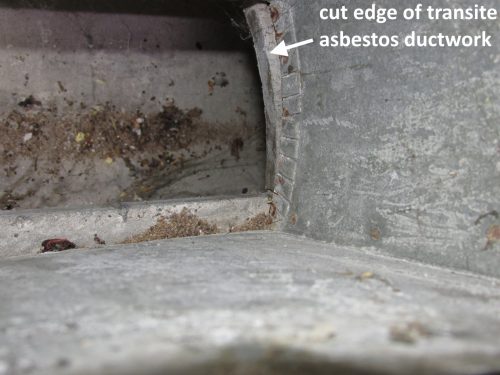 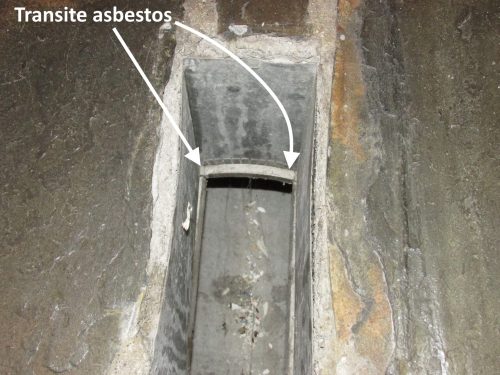 Transite asbestos is whitish and has a cementitious look to it. And yes, cementitious is a word. It means exactly what you think it means. This stuff is not a concern from a health standpoint, because the fibers are not easily released into the air.

This stuff surely contains asbestos, and it’s sometimes a concern. Asbestos fibers could easily become airborne when it looks like the stuff shown below. The photo below shows a health concern, and we’d recommend having this material professionally removed or encapsulated. 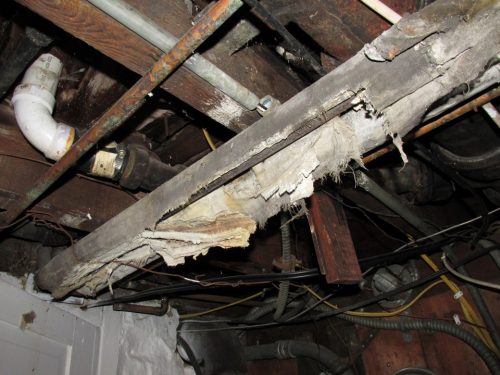 This next photo shows insulation that isn’t in great condition but isn’t nearly as bad as the stuff above. 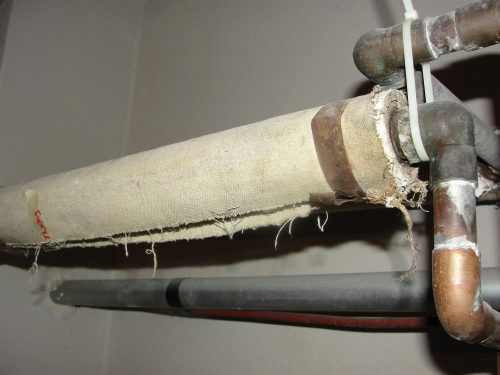 This next photo shows asbestos insulation that’s in good condition. It’s even labeled. Isn’t that convenient? 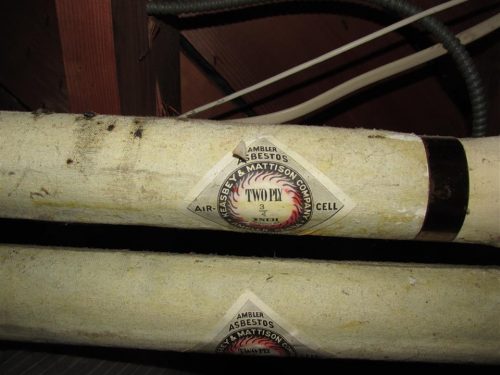 Some homes even have warning labels on asbestos insulation. This stuff has been well-maintained and does not pose any health concerns. 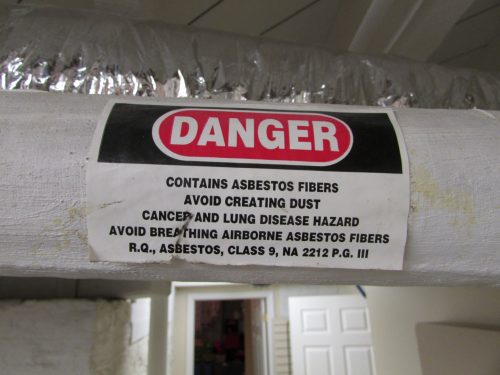 The boiler and gravity furnace shown below are both covered in insulation known to contain asbestos. 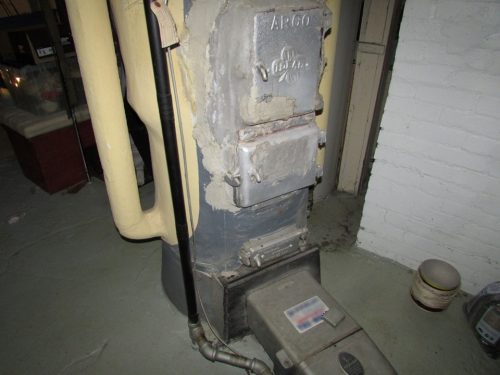 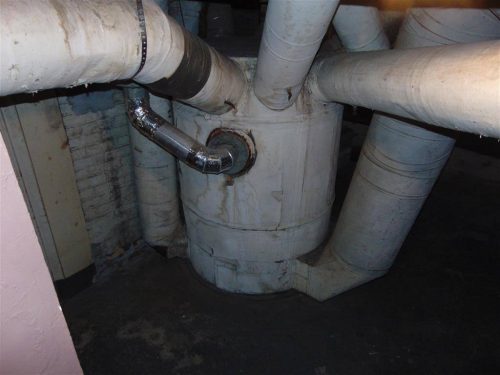 Most of the insulation on this ductwork has been removed, but there is still a little left.  This white, papery material is known to contain asbestos. It’s not a big concern, but if it’s going to be removed, it should be done professionally. 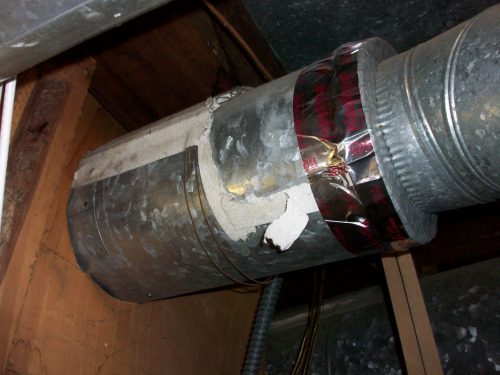 It’s typically safe to assume that 9″ x 9″ floor tiles contain asbestos, and that 12″ x 12″ don’t, but that’s only an assumption. There are no guarantees. 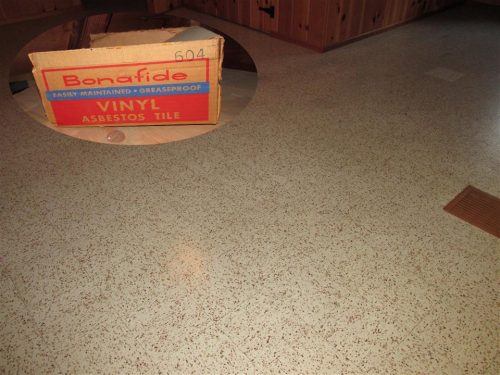 We have no concerns with these materials. The asbestos fibers are safely contained, and it would probably take an angle grinder to get any fibers into the air. But still, a lot of big-box flooring installers won’t install new floor coverings over this stuff, which is somewhat annoying.

I saved the worst for last. If you have vermiculite insulation, you should assume it contains asbestos. And don’t touch it! If you sneeze too close to this stuff, you’ll release a bazillion microscopic fibers into the air. Check out my blog about vermiculite insulation for details on exactly what this material is, why it matters, and what to do about it. 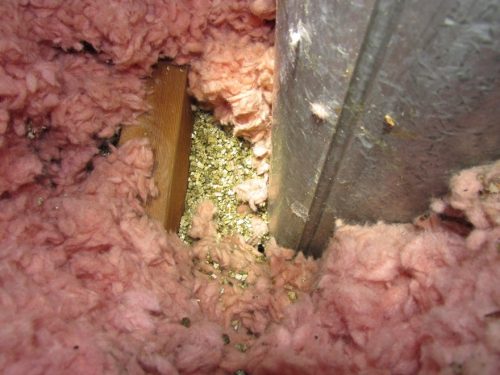 While it might seem all well and good to leave this material alone if it’s just in the attic, what happens when someone makes a mistake? This photo below shows a bunch of vermiculite that rained down from an attic behind a bathtub. 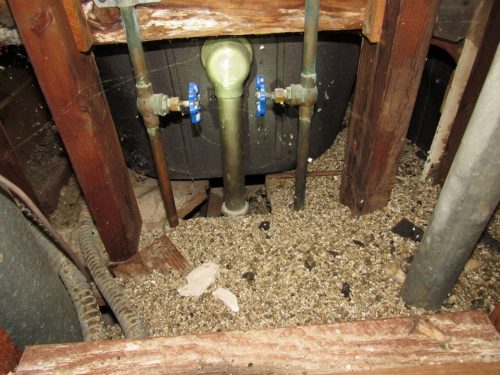 Those are the products commonly known to contain asbestos, but the list of products that might contain asbestos goes on forever. Here’s a small part of that list, used primarily in buildings before 1980:

What to do about asbestos

If you’re buying an old home, it’s probably safe to assume that you have asbestos in your home. In most cases, it’s not a big deal. Asbestos doesn’t do any harm as long as it remains intact and nobody breathes in the asbestos fibers. Follow the advice from the EPA and the CPSC: if asbestos-containing materials are in good shape, leave them alone. The one exception to this is vermiculite insulation, partially because there is money available to help homeowners with the costs of vermiculite insulation removal, and because the asbestos fibers in vermiculite can be released into the air just by looking at them wrong.

For the record, we at Structure Tech do not test for asbestos. When a client wants asbestos testing performed, we refer the above-mentioned company, Legend Technical Services. Home inspection standards of practice specifically exclude the identification of environmental hazards, such as asbestos. Nevertheless, most home inspectors that I know will point out the stuff shown in my photos above, because these materials are fairly easy to identify and all of these materials are very likely to contain asbestos.

For information about finding an asbestos abatement contractor in Minnesota, check out https://asbs.web.health.state.mn.us/search/find-contractor.jsf.

5 responses to “Asbestos in homes”