Who Inspected Your Roof?

You just had your roof covering replaced, and you paid a permit fee to the city to have your roof inspected.  What exactly does that municipal inspection consist of?  Probably a quick check from the ground.

Municipal inspectors typically don’t walk on roofs to inspect them.

That’s right.  When municipal inspectors in the Twin Cities come out to inspect roofs, they will rarely set foot on the roof, or even lean a ladder up against the roof.  The rules vary between cities – some prohibit their inspectors from walking roofs, while others actually provide ladders for their inspectors.

So why don’t municipal inspectors walk on roofs?  Because they don’t have to.  It’s documented in the Minnesota Administrative Rules for Inspections (1300.0210, Subp. 4.):

“The person requesting an inspection required by the code shall provide access to and means for inspection of the work.”

This means that if you expect your municipal inspector to walk on your roof, or even use a ladder to inspect it, you better have a ladder leaning up against your roof when they show up.  They probably won’t be bringing their own ladder.  If you DO have a ladder… they still might not. 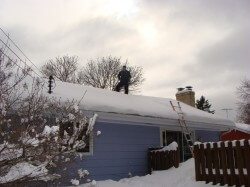 Roofing contractors all tell me the same thing; municipal roof inspections are anything but thorough.  One roofer told me that city inspectors barely get out of their vehicles.  I have a high level of respect for municipal inspectors, so I decided to get to the bottom of this.  To find out for myself, I sent out emails to twenty of the largest municipalities in the Twin Cities, asking if their building inspectors will walk roofs.  I wrote:

“If a municipal inspector is coming out to inspect the work for a permit issued for a residential roof replacement, will they walk on the roof to inspect it if a ladder is provided?  The roof has a pitch of 4:12, and is free of snow, ice, water, debris, etc.”

Here are the responses I received:

Here are two more tips I picked up from the email responses that I received:

If you have your roof covering replaced, make sure someone leaves a ladder for the inspector.  At least this way you’ll have a chance of someone getting on your roof to inspect it.

“…But The City Approved It!“